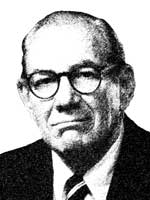 A corporate lawyer with a civic spirit; counsel to leading businesses and financial institutions in Western Massachusetts, while also fulfilling a pro bono mission to assist the poor.

The establishment of the Hugh J. Corcoran Scholarship Fund at MCLE brings together an organization and a principle that were important to Attorney Corcoran. He was fortunate to be able to watch MCLE as it outgrew its humble beginnings in the Springfield offices of Ely King and he had a tremendous respect for MCLE as an institution. Also, Attorney Corcoran believed that all persons who need legal help are entitled to representation whether or not they are able to afford it. For this reason, during his career he performed untold hours of pro bono work. In establishing this Fund, Attorney Corcoran’s long history of service to the bar as an advocate and a mentor continues.

Attorney Corcoran was educated in the Westfield schools, Massachusetts State College (Amherst), later University of Massachusetts and Boston University Law School. While in law school he was clerk to Governor Ely. He was admitted to the bar in 1938.

During the Second World War, Attorney Corcoran was a prosecutor with the Offices of Price Administration.