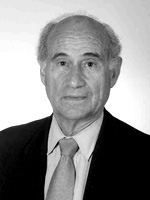 A superb role model, a compassionate advocate, and a leader deeply committed to the welfare of lawyers and the professional development of the bar.

October 28, 2009—As a result of a generous leadership gift from Murtha Cullina LLP and additional contributions from other donors, Massachusetts Continuing Legal Education, Inc. (MCLE) is pleased to announce the establishment of The James R. DeGiacomo Scholarship Fund to honor an outstanding member of the legal community who for over 50 years has continued to provide the highest quality of service to his clients while at the same time devoted considerable energy and effort to the continuing education of lawyers. MCLE is grateful to the dedicated committee that has helped to create this scholarship endowment so that it can have a lasting and meaningful impact:
Nelson G. Apjohn, Nutter, McClennen & Fish LLP;
Gene D. Dahmen, Verrill Dana LLP;
Diane M. DeGiacomo, Cain Hibbard & Myers PC;
Mark G. DeGiacomo, Murtha Cullina LLP; and
Thomas S. Vangel, Murtha Cullina LLP.

A partner of the Boston firm of Roche, Carens & DeGiacomo, which merged with Murtha Cullina LLP in 2000, Jim DeGiacomo has extensive experience in the areas of civil litigation, legal malpractice defense, fiduciary litigation and family law. Throughout his entire career, which began in 1957, Jim has served as a mentor and role model to so many, and his influence has been—and continues to be—wide-ranging. A superb lawyer known for his compassionate representation of his clients, he has also committed much of his career to the welfare and professional development of the bar as teacher, leader and advocate. While busy with the practice of law, he always finds time to help others, including his students at the New England School of Law, where he taught for over 40 years; his colleagues as a member and chairman of the Board of Bar Overseers; his position as a director of Lawyers Concerned for Lawyers; and the entire bar as an active volunteer at MCLE. The legal community remains truly indebted to him for the inspiring example he provides.

The James R. DeGiacomo Scholarship Fund will endow scholarships every year, in Jim’s name, to legal services staff attorneys, practitioners who accept pro bono cases, and other deserving lawyers who, without financial assistance, would not be able to attend MCLE programs. It is the hope of MCLE that creating this fund in Jim’s name to help train lawyers who represent underprivileged or traditionally underserved populations and give voice to some of the most vulnerable members of our society is a meaningful and appropriate way to demonstrate our admiration for this remarkable man. This is especially true given his active involvement with MCLE over the years, where he has served on faculty for nearly 75 programs, as an author on several publications, and as a trustee during MCLE’s most formative days. Indeed, his leadership as president in 1984–1986 helped lay the foundation for MCLE’s success as the premier provider of continuing legal education in Massachusetts and a model for other CLE organizations across the country.