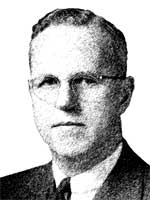 An advocate and leader, he dedicated his professional life to the causes of many boards and civic organizations in Western Massachusetts.

Loyal to his place of birth and the city he loved, Louis W. Doherty returned to Springfield, Massachusetts directly upon graduating from Harvard Law School in 1922. In 1967, he joined colleagues from Harvard Law School to found the general practice now known as Doherty, Wallace, Pillsbury & Murphy. The law firm has flourished as one of the largest law practices in Western Massachusetts, reflecting Mr. Doherty’s values of integrity, high standards, and public service.

Louis W. Doherty’s lifetime achievements, both in private practice and in civic duty, illustrate how a man can blend a highly successful legal career with a commitment to public service. He served his country in both world wars—as a soldier in World War I and as chair of the World War II war bond effort in Springfield. He also served as a U.S. Commissioner and as a chair of the Springfield License Commission. Over the course of his distinguished professional career, Mr. Doherty held various posts of trustee and director and clerk of three Springfield financial institutions. He gave generously of his time and talent on other boards to whose causes he was deeply committed, including the Springfield Boys & Girls Club.

Louis Doherty’s dedication to his family, to his Roman Catholic parish in Longmeadow, and to his political party characterize him as a generous and caring lawyer who made a significant impact on his community. Lawyers who receive scholarships through the Louis W. Doherty Scholarship Fund at MCLE will benefit from the generosity of the Doherty family in establishing this lasting memorial to the gracious man they call their father, grandfather, mentor, and friend.

Established in 2006 by generous gifts from his sons James L. and Paul S. Doherty.