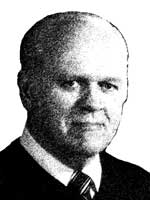 A trial and appellate judge, whose thoughtful commentaries on Massachusetts’s bench, bar and courts have become part of the Commonwealth’s legal literature.

The existence of the Honorable Edward F. Hennessey Scholarship Fund is the testament to the significant impact the former Chief Justice of the Massachusetts Supreme Judicial Court has had upon many lawyers in Massachusetts. The Fund was created through the combined generosity of Justice Hennessey’s colleagues at Martin, Magnuson, McCarthy & Kenney, where he is of counsel, and the many law clerks who have had the privilege to call him their mentor and friend during his distinguished tenure on the beach.

By providing need-based scholarships in trial and appellate advocacy and thereby expanding the reach of continuing legal education to all practitioners, the Honorable Edward F. Hennessey Scholarship Fund will accomplish educational goals that Justice Hennessey has espoused through his years as a trial lawyer, as a justice on the Superior Court and the Supreme Judicial Court, as a professor of law and on the faculties of many continuing legal education programs at MCLE.

During World War II, Justice Hennessey served our country as Captain in the U.S. Army, receiving the Bronze Star and six battle stars. He began his legal career in 1949 as a trial lawyer. He practiced at the state and federal court levels, handling both civil and criminal matters. From 1967 until his appointment to the Massachusetts Supreme Judicial Court in 1971, Justice Hennessey served as an Associate Justice on the Massachusetts Superior Court. From 1976 until his retirement from the bench 1989, he has Chief Justice of the SJC.

After retiring in 1989, Justice Hennessey remained active in the law, serving as of counsel at Martin, Magnuson, McCarthy & Kenney in Boston, as settlement counsel in the alternative dispute resolution program of the United States Court of Appeals from the First Circuit, and as Adjunct Professor of Law at both Boston University School of Law and Boston College Law School. A legal scholar, he wrote extensively on the subjects of trial and appellate technique, judicial administration and Constitutional law. He chaired numerous commissions, including Massachusetts Ethics Commission, the Massachusetts Commission on Equal Justice, the Supreme Judicial Court Historical Society and the Governor’s Advisory Commission on the Bicentennial of the Constitution, and served as president of both the National Conference Chief of Justices (NCCJ) and the National Center for State Courts (NCSC).