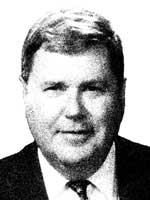 A gifted lawyer, he successfully blended a legal career with an exemplary commitment to service and charity, demonstrated unparalleled generosity and could fill a room with his overflowing warmth.

With the support of the family, former colleagues, and many friends of the late Edward F. Hines, Jr. (1945–2006), MCLE remembers and honors an outstanding lawyer, a mentor to many, and a tireless volunteer who contributed so much to the communities of which he was a part. Ned Hines’s passing on August 14, 2006 marks the Commonwealth’s loss of a brilliant tax lawyer and a dedicated advocate who volunteered a significant portion of his life to professional and charitable organizations serving the legal community and the general public. From his important work with and chairmanship of the American Heart Association to his leadership and active involvement in so many bar activities, including the Boston Bar Association and MCLE, Ned Hines was a role model and philanthropist who led by example. He was a man whose life touched and enriched the lives of so many others.

When it came to the law, Ned Hines believed that everyone, regardless of means, should have qualified representation, which begins with the education of lawyers. In addition to his many other important activities, Ned donated much of his time and effort to help MCLE grow and remained an active volunteer for his entire career. He served on MCLE’s Board of Trustees from 1981 through 1989, and led MCLE as its president in 1986 and 1987, laying the foundation for MCLE’s future success as the premier provider of continuing legal education in Massachusetts.

Ned’s lifetime achievements, both in private practice and in civic duty, illustrate how a person can blend a highly successful legal career with a strong commitment to public service and charity. He truly was an extraordinarily thoughtful and gifted lawyer and advisor whose appetite for work could be characterized only as insatiable. Like the many other professional and charitable organizations he served, MCLE benefited greatly from his leadership and friendship. Despite all of his accomplishments, what most reveals the person of Ned Hines, what people most admired, is how he comported himself in all venues—with respect, good humor, and sincere affection. It is that for which he was cherished in his lifetime and for which he will be long remembered.

MCLE is proud to administer the Edward F. Hines, Jr. Scholarship Fund in honor of our friend and colleague who believed deeply in the continuing education of lawyers.