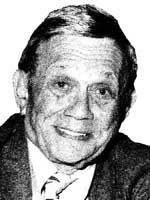 An impassioned advocate who promoted equity and fairness for families.

The family, former colleagues and many friends of the late Monroe L. Inker (1926–2006) join with MCLE to remember and honor a man whose passion for the law, mastery of courtroom practice, and love of research, writing and teaching spanned a career of more than half a century. Monroe Inker’s passing on April 15, 2006 marks the Commonwealth’s loss of a preeminent lawyer, impassioned advocate, catalyst for equitable distribution, and dedicated mentor to many.

Monroe Inker loved the law. Known throughout the Commonwealth as a fiercely competitive strategist who excelled in the adversarial process, he was in his element in the courtroom. Few lawyers who found themselves opposite Mr. Inker in the high-stakes, highly publicized divorce trials that were his signature could match his relentless competitiveness, depth of knowledge and skilled advocacy. While he enjoyed the limelight, Mr. Inker took just as much pleasure in challenging his associates and law school students to take their own careers to the limits of excellence. During the course of his long and distinguished career, he taught theory and practice at four Massachusetts law schools and gave hundreds of young associates the privilege of researching the law and trying cases at his side. For many years, Mr. Inker chaired Massachusetts Continuing Legal Education’s Family Law Conference, volunteered for countless CLE panels and wrote about family law for several notable MCLE publications. He also co-authored volumes in West Publishing Company’s Massachusetts Practice with colleague, Charles P. Kindregan, Jr., who summed up Mr. Inker’s tough-minded skill simply as that of “a tiger.”

One of Monroe Inker’s greatest professional accomplishments was his work in persuading the Massachusetts legislature to pass laws enforcing the equitable division of marital property. Sensitive to the often unfair outcomes of divorce settlements for wives of long-term, traditional marriages, Mr. Inker promoted the passage of the Commonwealth’s “no-fault” divorce law in the 1970s. Thanks to his efforts, Massachusetts became one of the best protectors in the nation of women’s equitable interests in divorce. Thirty years later, Mr. Inker again demonstrated his interest in promoting equity and fairness, writing a noted amicus curiae brief in the groundbreaking Massachusetts case, Goodridge v. Department of Public Health.

Monroe Inker’s greatest joy was his own family; Elaine, his wife of 46 years, and their two daughters and four grandchildren. His partners and associates at his firm, White, Inker, Aronson, PC, and more recently at Rubin & Rudman, LLP, were like an extended family, to whom Mr. Inker was father, mentor, colleague and friend.

Proceeds from the Monroe L. Inker Scholarship Fund will enable young lawyers to train as courtroom lawyers, as dedicated advocates and as lifelong students of the law. Annual auctions of Monroe Inker’s Boston Red Sox regular season and playoff tickets have raised over $115,000 for the benefit of this fund.