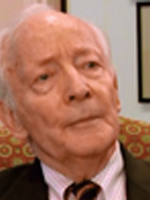 MCLE’s founder and consulting director. In 1969, he envisioned an organization that would meet lawyers’ needs for practical continuing legal education in Massachusetts.

March 19, 2019—In the late 1950s, MCLE Founding Director Richard S. Milstein began CLE in Massachusetts with the vision of creating a statewide curriculum for lawyers in an effort to keep raising the caliber of their professional and ethical service to their clients and communities. With a small cadre of prominent members of the bar, he incorporated MCLE in 1969, presenting a handful of programs in hotels across the state. Fast forward 50 years and now MCLE is an award-winning national model that offers hundreds of programs every year, maintains an extensive book collection of 190 practice manuals, and boasts the most comprehensive online database of applied Massachusetts law—all from the seeds that Dick sowed and cultivated. As a result, the organization he founded now serves thousands of lawyers each year who rely on MCLE to help them in their practices and professional development.

Despite his robust law practice in Springfield, first at Ely, King, Kingsbury & Corcoran and then Robinson, Donovan, Madden & Barry, Dick remained active in the activities and leadership of the organization throughout his legal career. Even after his formal retirement from the practice of law in 1998, he continues to this day to inspire and place his mark on the organization by blending his long view back with his signature optimism for the future.

From the beginning, Dick has always been committed to making education as accessible as possible, whether it was with the innovative use of public television to reach lawyers around Massachusetts in the mid-1970s or his generosity in providing for those with need. His foundation-building contributions over the years to MCLE’s scholarship endowment have helped lower the barriers to access by funding scholarships to MCLE programs for lawyers who serve the public interest. When MCLE renovated its facilities in 2015-2016, he donated funds to install a state-of-the-art assistive listening technology to make MCLE programs on site as accessible as possible for the hearing impaired. That gift also provided the seed money for MCLE to begin adding closed captioning and written transcripts to its online programs—the first CLE organization in the nation to do so—thereby enhancing their accessibility for increasing numbers of online learners and a new generation of digital natives.

Today, he continues to raise the bar! On the occasion of MCLE’s 50th anniversary, he has created a fund to endow a free lecture series that will feature prominent presenters on compelling, cutting-edge topics related to law, the profession, and society. The goal of this new forum is to attract top thought leaders to promote a high level of provocative discourse on issues that impact the law and the way lawyers practice, including, among other topics, artificial intelligence, genetic modification, globalization and the shrinking world, cyber security, and the changing Court. National Public Radio’s Nina Totenberg’s keynote presentation on “The Supreme Court and Its Impact on You” at MCLE’s 50th anniversary program in October 2018, marked the inaugural Richard S. Milstein Lecture. MCLE is currently working on ideas for future programs in this series. We thank Dick for his continuing legacy and his boundless vision.

Since its endowment, lectures in this series have featured the following prominent speakers:

Always thinking ahead, in true Milstein fashion, Dick has made arrangements to keep this lecture fund growing for years to come. In that same spirit, we invite others to join him in enhancing the impact of this fund by making a tax-deductible contribution to the Richard S. Milstein Lecture Series Fund by making a donation below.

Established with generous gifts from:

Additional Contributions Made By: