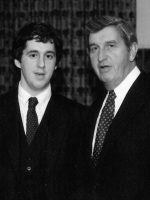 Gifted criminal law practitioners and model professionals who represented and served the legal profession and its highest ideals with great skill and integrity.

Massachusetts Continuing Legal Education, Inc. (MCLE) is pleased to announce the establishment of the Robert F. and Peter J. Muse Scholarship Fund to honor and pay tribute to two legendary criminal law practitioners whose skill and integrity placed them in an elite class of attorneys. Led by John C. Prescott, Jr. and Julie Muse Stanley, a committee of close friends, family, and colleagues have joined together to create a named scholarship fund to honor Robert and Peter Muse, who passed away just weeks apart from each other in November and December 2012, at the ages of 92 and 57, respectively. Practicing at the highest level of their profession, both father and son devoted their formidable trial skills to relentlessly and zealously defend the liberty of all their clients, regardless of how unpopular the cause. The ultimate professionals, they were indefatigable in their pursuit of justice, and their strength of character and personality earned them the respect of colleagues, opponents, and judges alike.

A graduate of Malden Catholic High School, Boston College, and Suffolk University Law School, Robert Muse represented the rights of his clients with the same courage and dedication that made him a decorated World War II Marine Corps fighter pilot. A tireless veteran of nearly 1,000 trials over a career that spanned six decades, he was renowned for his relentless pursuit of justice for his clients. Among his innumerable successes and accomplishments, his decade-long quest to free Bobby Joe Leaster, wrongfully convicted in 1971 of first-degree murder, counts among his most precious.

Like his father, Peter Muse brought the same kind of zeal and fearlessness to his representation of his clients. A 1997 graduate of the University of Pennsylvania and a 1981 graduate of Suffolk University Law School, he clerked for Appeals Court Judge Charlotte Perretta, served as an assistant district attorney in Suffolk County and then as a trial lawyer for the Committee for Public Counsel Services before fulfilling his lifelong ambition of practicing law with his father. Known for his careful preparation and trial skills, he was assigned 33 murder cases and retained privately in many others—to the great benefit of many clients.

The Robert F. and Peter J. Muse Scholarship Fund will endow scholarships every year to enable deserving lawyers who serve the public interest, including practitioners who accept pro bono cases, bar advocates, legal aid attorneys, and government lawyers, to attend MCLE programs—a fitting tribute to two remarkable lawyers who generously gave of their time to mentor, teach, and help shape the careers of many young lawyers.